To share your memory on the wall of Stacy Thomas, sign in using one of the following options:

He was married to Polly Jo (Brdar) Thomas of Beaver, PA, from 1984 until his death, and together they enjoyed travel, entertaining, various cuisines, music, movies, and reading. Having no children, they raised two “families” of three dogs each. Weimaraners (14 years) and Catahoulas (13 years), and finally adopted Mona from the Lawrence County Humane Society in 2009 until her death in 2019.

Stacy is survived by his wife, Polly of New Castle, PA and his sister, Nealette Thomas of Nixon, TX.

Due to COVID-19, Visitors are required to adhere to CDC guidelines regarding the wearing of face masks, the six-foot rule will be honored. Thank you for your understanding.

Burial will be in Castle View Mausoleum.
Read Less

Receive notifications about information and event scheduling for Stacy

We encourage you to share your most beloved memories of Stacy here, so that the family and other loved ones can always see it. You can upload cherished photographs, or share your favorite stories, and can even comment on those shared by others.

Guaranteed hand delivery by a local florist
AN 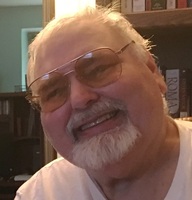